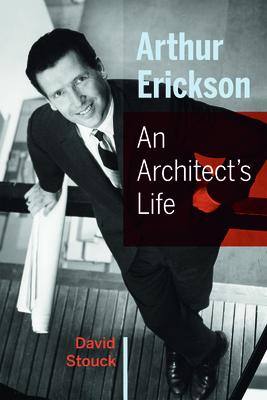 This is the first full biography of Arthur Erickson, one of Canada’s most famous, though controversial, architects.

The author, David Stouck, lives in Vancouver where Erickson had his home base.  Now Professor Emeritus of English at Simon  Fraser University, Stouck has written biographies of Ethel Wilson and Sinclair Ross. With Erickson, he had a chance to check his material between 2005 and 2009, when Erickson died. The result is a fascinating look at some of the criticisms surrounding famous buildings such as Roy Thomson Hall in Toronto, Simon Fraser University and the Canadian Chancery in Washington.

Erickson was born in Vancouver in 1924, when the city numbered barely 117,000 people. At school he quickly showed talent in drawing and sketching and was taught by Lawren Harris, who recognized his talent. He went on to the McGill School of Architecture where John Bland was the distinguished director, and Gordon Webber a brilliant professor. He won a travelling scholarship and set off for Europe as well as the Middle East where he never forgot the beauty of Greece’s Parthenon or Istanbul’s Hagia Sofia.

This book takes a fair look at Erickson’s considerable ability and personal charm. He gained fame around the world but this was shattered by a high-living life style that eventually left him broke. There are excellent photos of his work, as well as his famous friends. It is a sympathetic look at many sides of a genius.