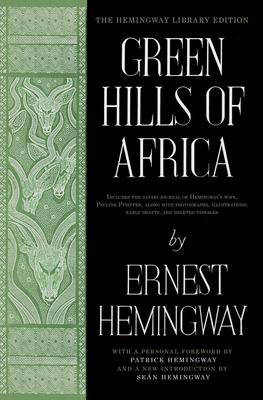 This is a new edition of Ernest Hemingway’s 1935 book on a hunting safari in East Africa. He travelled with his wife, Pauline Pfeiffer, whose own experiences are recorded here for the first time.

Green Hills of Africa gives a wonderful description of both the beauty of the countryside, and the thrill of the chase. Hemingway tries to explain this thrill at a time even then, when the animals were being threatened by the incursions of man. His wife writes more fully on the lives of the Africans they got to know; their music and dancing and festivals of life.

There is also a personal foreword by Patrick Hemingway, the author’s sole surviving son, who spent many years as a professional hunter in East Africa, as well as a new introduction by Sean Hemingway, grandson of the author. There are photographs of Ernest Hemingway with the safari crew and rhino they killed as well as Hemingway with his lion on the Serengeti Plain. There are also copies of his list of trophies, i.e. the animals killed, and some pages from his original manuscript, showing changes he marked.

Hemingway’s books, The Sun also Rises and A Farewell to Arms established him as one of the leading literary lights of the 20th century. He won the Pulitzer Prize for The Old Man and the Sea and the Nobel Prize for Literature in 1954. This edition of an earlier book shows how his writing developed.