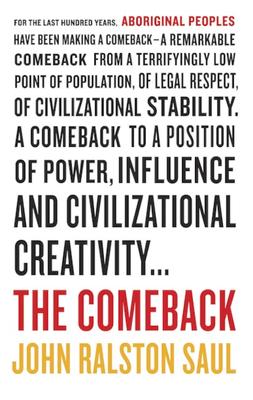 John Ralston Saul has included Canada’s First Nations in many of his books and articles on this country. In this book he looks at the comeback of these people in numbers and influence.

At the beginning of the 20th century, the population of the First Nations and Metis people had shrunk from as many as 2 million people (when the Europeans arrived) to approximately 150,000.  In spite of endless Treaties, they had lost much of the land they had used for food sources, had picked up many European diseases, and altogether lost much of their way of life. The Canadian government had made bad mistakes, in setting up residential schools to try to break down the families, in forbidding the potlatch (a beloved and religious ceremony) , and in taking away their right to vote. The population today is back to 2 million.

This book shows how the Idle No More movement illustrates a difference in Canadian relationships. Both sides realize citizens’ rights must be recognized. Saul includes many letters and speeches from First Nations chiefs and the effect these have had on improving relations. The last one is from a chief in Manitoba, now a professor at the University of Manitoba. He says he is a man who quit drinking when his grandson was born, to give this little boy the greatest gift he could give – love. He says all of us in Canada can do more, if we listen to each other and give each other gifts of responsibility.

Saul is one of Canada’s leading public intellectuals. He is president of PEN International, and has published fourteen works, translated into twenty-five languages.