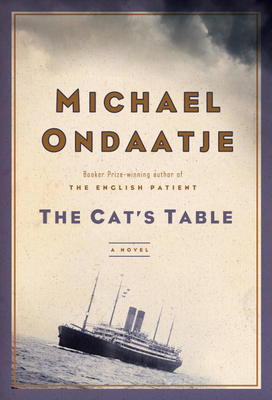 From the moment eleven-year old Michael Ondaatje climbs on board the luxury liner “Oronsay” to sail from Ceylon to England there is a feeling of adventure that makes “The Cat’s Table” a sheer delight to read. The reviews are pouring in, and they all say the same thing. People who loved “The English Patient” and
“In The Skin of a Lion,” but found later Ondaatje books a bit obscure, are thrilled with the fast pace, sense of magic and mystery, that fill this new book.

Ondaatje takes a true happening from his own life; he did leave Ceylon as an ll-year old to meet up with his estranged mother in England: a trip of 2l days on a 7-storey liner holding 800 other passengers. When he told his own children, many years later, about this trip, they were so full of questions that he turned back and decided to use the trip for a fictional account of three young boys, travelling alone, and their close meetings with adults, romantic, dangerous, sometimes terrifying.

The cat’s table referred to the least prestigious spot in the ship’s large dining-room, the farthest away from the Captain’s Table. This did not mean it did not have some fascinating members: the musician, retired from a jazz band, who played with the ship’s orchestra and was full of ribald lyrics; a mysterious spinster who wore a jacket with pockets to carry live pigeons, a retired ship dismantler who had the complete run of the ship and got the boys into forbidden spots in the engine and furnace rooms as well as the lifeboats where they hid for hours eating stolen fruit from the First Class.

Michael, nicknamed Mynah, finds his l7-year old cousin Emily on board ship, and has a very touching visit catching up and reaching an intimacy he had not known before. As the book, and the journey, progress, and Aden and Port Said are reached, Ondaatje flashes forward to his later life, remembering how his discoveries on shipboard affected his own emotions. In England he picks up with the boys he knew on board. He even tracks Emily down on the west coast of British Columbia.

Because Ondaatje is so frank in sharing what is true, and what is fiction, we get a quite inspired story of youth and age, of growing up, snatches of life in Ceylon versus life in England. Ondaatje is generous, as well a polished and graceful writer. This is a wonderful book.