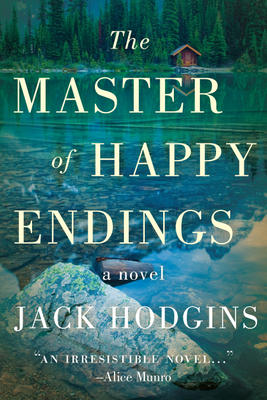 This is “an irresistible novel”, as Alice Munro says, by one of Canadian Literature’s early writers.

Jack Hodgins lives and writes in British Columbia. Since “Spit Delaney’s Island” (stories) he has produced twelve books including novels, books for children, a travel book and a guide for teaching fiction.

“The Master of Happy Endings” is now out in paperback, and you can enjoy the story of Axel Thorstad, a tall, 6 foot eight inches, Norwegian, retired school-teacher, who lives in a cedar shack on an island in the Georgia Strait, off Vancouver Island, where he plunges into the ocean to swim every day and tries to get over the loss of his beautiful wife, Elena. His hermit’s life was beginning to pall when he hit on the idea of running an ad in the B.C. papers advertising his services as a tutor.

His reputation as a superb teacher brought in some interesting results, and he found himself on the way to Los Angeles to tutor a boy who had been offered parts in a television series but was failing at school. The story is fascinating and Thorstad more than holds his own with Hollywood operators. While finding his way around this tinsel world he is not fooled, and returns to his cedar shack. Who knows what next? The offers keep coming in. As one reviewer notes Thorstad is the kind of man a reader might want to spend time with.