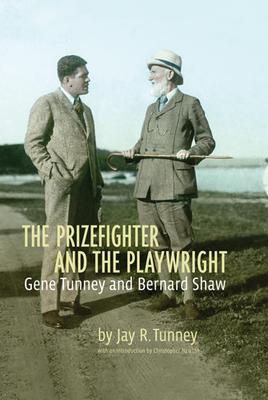 This is a fascinating book about a friendship beween two fighting Irishman, both famous in very different ways.

Jay Tunney is the son of Gene Tunney, the American boxer who left his profession at the top of his fame. World-renowned, he had occasion to meet the great Irish playwright, Bernard Shaw, because of a play Shaw had written on a boxer called “Cashel Byron’s Profession”. It turned out Shaw himself had done a little boxing himself. More extraordinary was the fact that Gene Tunney, growing up poor and uneducated on the lower west side of New York, had from early days taught himself to read and developed a
love for all kinds of literature which he would later discuss with Shaw, often meeting the authors of the books he loved.

Jay Tunney writes candidly but with obvious affection about his handsome father who became a legend in the boxing world not only because of his superlative, but fair-minded fighting style, but because of his insistence on time and place for study. As it happened, the Shaws and Tunneys got together often, for visits to Shaw’s home in England, and for an eventful trip to Brioni, the seaside resort where Mrs. Tunney almost died, and Shaw revealed a caring side that few people ever saw.

The book is full of stories on Tunney’s career as well as the theatre life of many of Shaw’s plays. Famous personalities on both sides of the Atlantic knew one or both men and were often intrigued to be with them together, as friends. It is altogether a very successful double portrait.