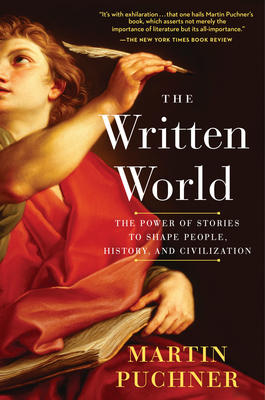 Martin Puchner is a Professor of English and Comparative Literature at Harvard University. His prize-winning books range from philosophy to the arts. He is best-known for his six-volume Norton Anthology of World Literature which brings four thousand years of literature to students everywhere

In The Written World, he outlines what people have written and read over the last 1,000 years. It makes for an ingenious history of civilization. To do this, Puchner travelled across continents “from Mesopotamia, Nineveh, clay tablets, cuneiform and Gilgamesh.”

The Apollo 8 read from Genesis using an alphabet that had been created in Greece. He wrote the lines on paper, a convenient material that originated in China and came to Europe and America via the Arabic world. He used the Bible bound as a book, a useful Roman invention. The pages were printed, a Chinese invention that had been further developed in northern Europe.

Puchner’s main point is showing us that it was only when storytelling intersected with writing that literature was born. Before that, storytelling had existed in oral cultures, with different rules and purposes. Puchner puts his focus therefore on the evolution of creative technologies, such as the alphabet, the book and print.

He sees the larger story of literature unfolding in four stages: the first dominated by small groups of scribes who alone had mastered the difficult writing systems, such as the Hebrew Bible, and Homer’s Iliad and Odyssey; the second by charismatic teachers such as the Buddha, Socrates, and Jesus. In the third stage of literature individual authors emerged, such as Cervantes in Spain; finally, in the fourth stage, the widespread use of paper print brought in mass production as we know it.

Puchner shows how stories and literature have created the world we have today.