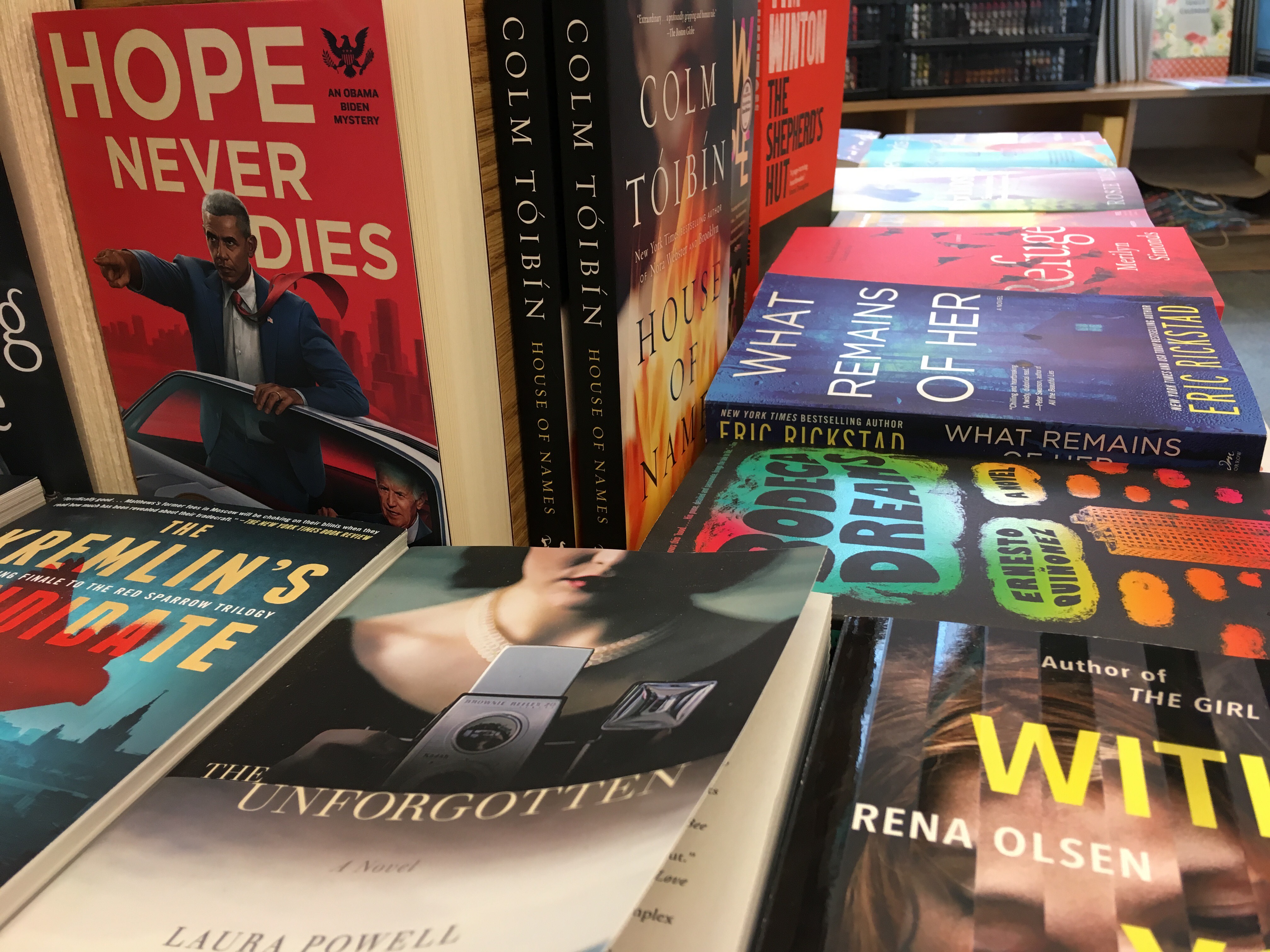 1. Full Disclosure by Beverley McLachlan
2. Warlight by Michael Ondaatje
3. Calypso by David Sedaris
4. My Twenty-Five Years in Provence by Peter Mayle
5. The Ministry of Utmost Happiness by Arundhati Roy
6. A Legacy of Spies by John Le Carre
7. Kitchen Confidential by Anthony Bourdain
8. A Secret History of Witches by Louisa Morgan
9. The Witches of New York by Ami McKay
10. The Word is Murder by Anthony Horowitz

Welcome to the home stretch! It doesn’t seem like too long ago we were celebrating the arrival of summer, and now here we are getting ready to say goodbye to it. Well, maybe not quite yet – it is only the beginning of the month, after all – but with the cicadas humming and that steamy summer haze hanging in the air, it’s not hard to tell what month we’re in. Despite the fact that all the signs are indicating that the end of the sunny season is fast approaching, we’re here to assure you that there’s still time to get some of that all-important summer reading done!

After the great excitement of big-name spring releases, this time of year tends to be slightly quieter for us. Because of this, there’s no better time to take a soothing stroll through the stacks to search out new authors and discover some of the hidden gems that we’ve got tucked away on our shelves. Holly Ringland is a debut Australian author who, in The Lost Flowers of Alice Hart, tells the beautiful coming-of-age story of, believe it or not, Alice Hart. Faced with a family tragedy at the tender age of nine, Alice is forced to leave the only home she’s ever known to go live with her grandmother on a flower farm. Spanning two decades, this novel shows us different sides of Alice as she makes her way through life searching for meaning, love, and belonging amidst the jumble of her past, present, and future. Another debut author that we’re quite excited about is Rachel Heng. As our society still seems to be fascinated by prolonged lifespans and superfood “health” regimes, Suicide Club could not have been released at a more appropriate time. Set in near future New York City where the average human life now lasts three hundred years, humanity is still striving for the ultimate prize: immortality. Lea Kirino’s genetic makeup ticks all the necessary boxes and puts her within easy reach of her immortality goal, provided she follows all the right rules and regimes, that is. But when a chance encounter with her estranged father introduces Lea to the Suicide Club, a group of rebels who reject society’s quest for never-ending life, she must decide which life is the one for her – the clean-cut immortal one or the bittersweet whirlwind with the only bit of family she has left. The Talented Ribkins by Ladee Hubbard is a first novel that marks the beginning of what will no doubt be a prestigious writing career. The Ribkins are a family with some slightly odd, and not overly useful, talents – seeing colours that no one else can, being able to breathe fire, climbing perfectly flat walls sans equipment, and being able to produce a detailed map of any space without ever having been there. Though these skills failed to be useful in helping the civil rights movement, they did prove to be indispensable in the Rbikin family’s life of crime. Stealing from the wrong person though, can have deadly consequences, and now John Ribkin finds himself traveling from coast to coast in a unique and humorous attempt to pay off his boss, save his own skin, and protect his family.

Aside from the debut authors we keep discovering around the store, there are a few repeat authors that we’re pretty excited to be hearing from again. We’re very happy to have another offering from Emma Hooper whose debut novel from a few years ago, Etta and Otto and Russell and James was one of our favourites! Set in Newfoundland, Our Homesick Songs is a beautiful story about the importance of love and family when the livelihood your people have known for generations is taken away from you. Merilyn Simonds, a Kingston author who has astounded us again and again with her fascinating works of non-fiction and her touching novels, has delivered a timely tale in her new novel, Refuge. Dealing with the moral questions surrounding immigration and refugees, this book will warm your heart, break it, and build it back up again. Elizabeth Hay calls it “a silk scarf of a novel.” Since reading her very first novel, we’ve been hooked on the genius of Anne Tyler‘s writing. Far from disappointing, her new novel, Clock Dance, carries readers through five decades of Willa Drake’s life, grieving, loving, hoping, and smiling alongside her through all the ups, downs, and unexpected surprises that come her way.

Have you ever wanted your vocabulary to have a bit more of a je ne sais quoi kind of feeling? Or perhaps you want to get a bit better at presenting a laissez-faire attitude to the world. Well, not only can Laura Lee help you with that, but she can guide you through that whole tricky world of foreign phrases and cliches. Savoir Faire is a neat pocket guide to everything you need to know to add a bit of spice to your vocabulary and to become a member of the intelligentsia! With phrases ranging from Japanese to German to French, this book is a perfect resource for linguists, word nerds, or anyone who’s ever been frustrated by the works of Umberto Eco! It’s always a very exciting day for us when we find a true story in the store that is so well crafted, it reads like a novel. One such day came to pass when we picked up a copy of The Victorian and the Romantic by Nell Stevens. Telling parallel stories about two pairs of writers, novelist Elizabeth Gaskell and writer and critic Charles Eliot Norton, and Stevens herself (as a PhD student) and a budding screenwriter named Max, this book explores themes of love (lost and found), friendship, and the joys of writing. At once funny, intriguing, and surprising, this book, much like A Secret Sisterhood by Emily Midorikawa, is a book about books for anyone who loves storytelling and the art of the written word.

Although they’re the ones who will actually be going back to school come September, your teens still have a bit of time to indulge in a few more books before they hit the wall known as “required reading.” The extra studious among them might take this last month of holiday time as an opportunity to get a head start on their new assignments – there’s never a bad time to read Jane Eyre, after all – but a few will probably want to relish that last little bit of freedom by reading something completely different. As usual, we’ve got you covered! Described as “a story that will stay with you, like a summer you’ll never forget,” The Thief of Happy Endings by Kristen Chandler is a heartfelt story about a girl trying to pick up the pieces of her life while dealing with the everyday challenges of living on a horse ranch when it’s the very last place she ever expected (or wanted) to be. Debut author Caroline Leech carries readers back in time to experience life on a Scottish farm during WWII through the eyes of teenager Lorna Anderson. Wait for Me explores themes of love, hatred, forgiveness, and sacrifice as Lorna suddenly finds herself working alongside Paul, a German POW and a man who represents everything she’s been told her brothers and friends are fighting against. Set in a divided Germany, The House of One Thousand Eyes by Michelle Barker is a riveting historical story in which a young girl sets out to find her missing uncle, all without any outside help – when there are spies everywhere and you don’t know who you can trust, the only person you can rely upon is yourself. In the wake of all the Shakespeare retellings that we saw with the Hogarth Shakespeare Series for adults, it’s inevitable that we’ll find a few for kids and teens as well. Lucy Christopher‘s Storm-Wake reflects a dark version of The Tempest back at us in this story about Moss, a young girl living on a magical island, whose feelings for her father and her home are thrown into doubt as strangers begin arriving on their shores.

Some of the new and forthcoming books we’re excited about need no introduction at all, and others we simply don’t have to space to praise as we’d like. So, here is a little list of some of the other titles we think you should check out: The Quiet Side of Passion by Alexander McCall Smith, The Accidental Further Adventures of the Hundred-Year-Old Man by Jonas Jonasson, An Unwanted Guest by Shari Lapena, Roughneck by Jeff Lemire, Hope Never Dies by Andrew Shaffer, Up From Freedom by Wayne Grady, Starlight by Richard Wagamese, Women Talking by Miriam Toews, America, The Farewell Tour by Chris Hedges, Washington Black by Esi Edugyan (August 28), Us Against You by Fredrik Backman (September 4), Machine Without Horses by Helen Humphreys (September 4).

Summer might be winding down, but your reading doesn’t have to. We’ll be observing normal hours at the store throughout the month of August, so you’ll have lots of opportunities to pop by and pick up the perfect book for the lazy, hazy days ahead. We look forward to seeing you! 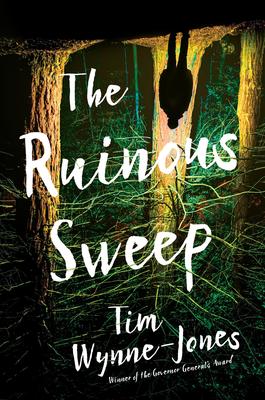 What I’m Reading: The Ruinous Sweep by Tim Wynne-Jones
“When a confused teen is thrown from a car on a deserted stretch of highway in the middle of the night, he has no idea what has led him to this moment. He does, however, have a niggling feeling that he’s been running away from something…or someone. So begins this harrowing and mystifying read that will hook you in on the first page. With a bit of mystery, a healthy dose of intrigue, a thrilling plot, and more than one unanswered question, this young adult novel is nothing short of a masterpiece!”