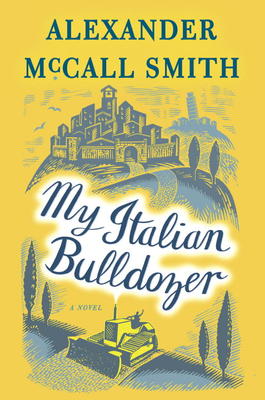 This is a new novel by the beloved Scottish author of the No.1 Ladies Detective Agency and a number of other series.

In this one, he introduces Paul Stuart, a well-known food writer in London who has written some popular books on food and wine in different parts of Europe. He was starting a new one, when his girlfriend of some time left him for her personal trainer. His editor, Gloria, suggested he travel to the part of Italy he was going to write about, for inspiration and cheer. He has already had success with books such as Paul Stuart’s Provencal Table, and Bordeaux Table, as well as books on Portugal and Spain.

Tuscany turns out to be a beautiful spot, as he settles into a charming village called Montalcano. His adventures start when his car-rental could not produce a car, and he is given a bulldozer which he proceeds to drive gingerly from place to place, getting attention to his own project along the way. The village people prove fun and competitive. A young American woman has particular appeal. In the end he finds happiness close to home in one of McCall Smith’s happy ever after endings. It makes for another of his irresistible loving books.