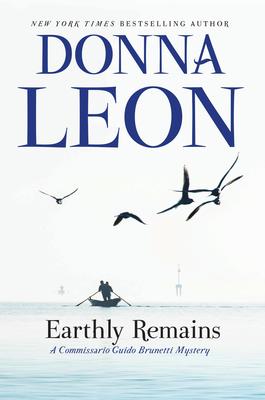 In this new mystery novel by Donna Leon, Commissario Guido Brunetti is taking a rare leave of absence which is rudely interrupted by the sudden death of his host.

Spending his time off in villa on Sant’Erasmo, one of the largest islands in the laguna, Brunetti is enjoying days of rowing a boat alongside the caretaker Davide Casati, who was also an excellent navigator. When a sudden and violent storm one day upset Casati’s boat at the landing, drowning its owner, Brunetti finds himself once again on the job, trying to solve a case complicated by other men’s actions at the time of the accident.

Brunetti is the starring detective in 26 stories in this beloved series by Leon. She has lived in Venice for most of her life (now dividing her time between Venice and Switzerland) and gives readers an up-close picture of the ancient city, the charm of the vaporetti rides through the lagunas, and details and rhythms of everyday life. Alongside the charm, however, lie problems from the huge influx of tourists as well as government corruption.

We have gotten to know and love Brunetti as he tracks down some of these crimes. He does it in a low-key manner, always allowing time to be with his own family, wife Paola and two children whom he loves and who become friends as we read the series.

Earthly Remains is a powerful new addition to this celebrated series.