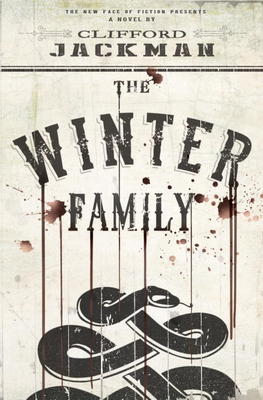 Come by the store on Saturday, June 11 to meet debut author Clifford Jackman. He will be here from 1:00pm to 3:00pm signing copies of his new book The Winter Family.

“After [the Winter Family’s] actions during the Civil War lead to a court martial, the group of hardened Union soldiers recasts themselves as outlaws, finding that the disorder of Reconstruction allows for a sort of savage freedom. From service as political thugs in a brutal Chicago election to their work as bounty hunters in the deserts of Arizona, there’s a hypnotic logic to [their leader’s] grim borderland morality that pulls the group into a whirlpool of unrestrained violence.

With its haunting, high-octane style, The Winter Family is a feverishly paced meditation that takes deadly aim at human nature and the dark contradictions of progress.”

“Clifford Jackman is a promising young author who grew up in Ottawa. His new book begins with a rogue band of psychopaths and social outcasts acting as foragers for Sherman’s army near the end of the civil war in the United States and describes the atrocities they begin to commit in the name of progress and the addiction to violence that ensues. It has episodes following their trek westwards at intervals over the next 30 years as civilization and the rule of law push them towards a final deadly end in Oklahoma. The book is fast-paced, authentic and gripping but be prepared for lots of violence.”