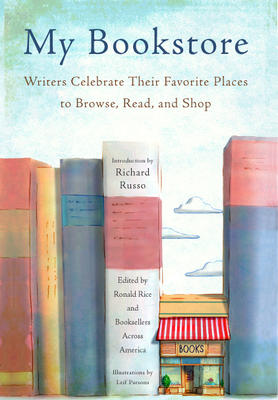 This is a charming book about bookstores across the United States that are favorites of some of the best-known American writers. There are 36 states in all represented, with delightful illustrations of each bookstore described here.

John Grisham, for example, lives in both Virginia and Massachusetts but chooses to write about “That Bookstore in Blytheville” which is in Blytheville, Arkansas. This is near the town where Grisham was born and when he came to introduce his own first books, the owner gave him a welcome which he has never forgotten.

Another best-selling author, Simon Winchester, lives in New York City and Massachusetts. He writes about “The Bookloft” in Great Barrington, Mass., which he loves for its highly knowledgeable staff and huge selection of books.

This book is about American bookstores but writer Richard Russo mentions Canada in the Introduction when he says: “independent booksellers always get the word out, and with their help great young writers you don’t know about yet will take their place on shelves next to their heroes, from Margaret Atwood to Emile Zola.”  In the Afterword, writer Emily St. John Mandel, who spent part of her childhood in Victoria, British Columbia, writes “when I was a child I was in love with Laughing Oyster Bookshop, the wonderful independent bookstore that’s still my favorite shop on all of Vancouver Island.” It would be nice if someone wrote about bookstores in Canada; then we could discover who declares “Books on Beechwood” their favourite.