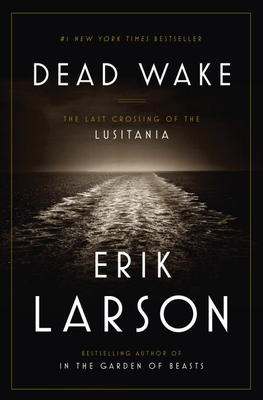 This is a thrilling account of the sinking of the Lusitania – how it happened and the people it affected.

The author, Erik Larson, has already published four best-sellers in which he fuses history and entertainment to give a vivid account for what took place. In Dead Wake, the fastest liner in service set sail from New York bound for Liverpool on May 1, 1915, when World War I was entering its 10th month.

Larson explains that the passengers on board were not anxious about the war even though Germany had declared the seas around Britain to be a war zone. The captain of the Lusitania was confident that the gentlemanly strictures of warfare, which forbade the attacking of civilian ships, would hold up as they had for a century. Germany wanted to change the rules and the captain of one of their U-boats was happy to oblige.

As the Lusitania and the U-boats made their way to the shores of Ireland, Larson introduces us to some of the passengers: a famous Boston bookseller, a woman architect, and President Woodrow Wilson among others. The liner was also carrying a record number of children and infants. When the sinking comes we are completely involved in the people aboard and the actual event is unforgettable. It gives Erik Larson another fine book.