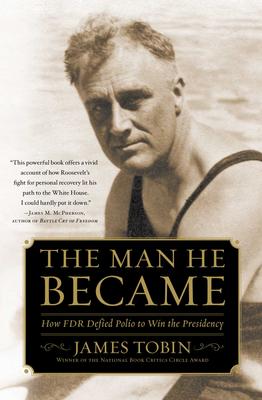 It was 1921. Franklin D. Roosevelt was rich, privileged, had already served in executive positions with the Navy, the Boy Scouts, and was well-known as a leading Democrat and descendant of Theodore Roosevelt, a popular President of years past. And then polio struck. He was 39 years old and completely paralyzed from the waist down.

This book by James Tobin gives the up-close story of how this remarkable man fought back and never gave up on his aim to be President of the United States. He did the exercises and eventually found that warm water and sunshine doubled his chances of healing. He bought the resort of Warm Springs, Georgia and helped it become a leading centre for disabled patients. As he began to get some feeling in his legs, he used braces, canes and crutches. He was insistent on keeping his disability as inconspicuous as possible – not from a feeling of pride but because he didn’t want the pity towards “being a cripple.” He was a tall, handsome man with a big head, strong voice, and he laughed a lot, which made people forget his injuries.

As the years went by Roosevelt became more and more prominent in Democratic politics and was chosen to be Governor of New York. By 1933 he was President –  and the rest is history: the Hundred Days in which Roosevelt fought the causes and effects of the Great Depression; the New Deal. There are many books written about Roosevelt. This one concentrates on the years he fought his own private battle and the effect it might have had on his handling of later political problems. Many thought it made a huge difference to the man himself, making him more conscious of other people, of weak people, of human frailty. His wife, Eleanor, thought it gave him strength and courage he had not had before.

James Tobin has won prizes for two earlier books: Ernie Pyle’s War and To Conquer the Air: The Wright Brothers and the Great Race for Flight. This one is an elegant and moving book, gripping from the start with a fine eye for the telling detail.