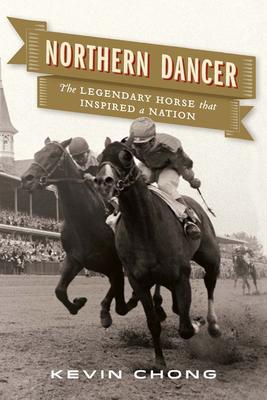 Reading Northern Dancer is almost like going to a horse-race. The thrilling action takes place in a few scant moments (at the track or reading this book) but the background story to this amazing Canadian thoroughbred is totally engrossing.

Northern Dancer belonged to the Canadian business tycoon, E.P. Taylor. His major hobby was building up a stable of race-horses first outside Toronto, later in Maryland, U.S.  We learn how he acquired Northern Dancer, a short, chunky colt who didn’t look like anything until he started to run. His Argentinian trainer played an important part, as did the jockey Bill Hartack.

It is now 50 years since the time the legendary horse won two of the Triple Crown races in the U.S. and Canada’s Queen’s Plate. He became a Canadian hero, just at the time we were still seeking our own identity and getting a Canadian flag. At the time of his running success, l964, the author Kevin Chong points out, Canadians could not have realized what an impact Northern Dancer would ultimately make on his sport. He left the track this same year and would become the greatest sire of his breed. About three-quarters of the thoroughbreds alive today, including the forty thousand foals born every year, carry Northern Dancer in their bloodline. In his career as a stallion, he had produced 635 foals, 467 winners, and l47 stakes winners.

Kevin Chong was born in Hong Kong and raised in Vancouver. He has written four other books, including the race-track memoir My Year of the Racehorse. He teaches creative writing at the University of British Columbia. He has a winner in Northern Dancer.