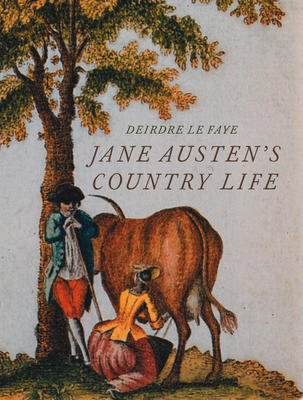 There have been many books written on Jane Austen and her beloved novels, some of the most important by this author, Deirdre Le Faye.

In this one, she take a close look at Jane Austen’s life in the countryside around the two towns where her father had his vicarages. These were Steventon and Chawton in Hampsire, South-West England. Her father had studied at Oxford before becoming a clergyman and Le Faye has already written about the scholarship and love of books in Jane’s background.

But her father also inherited considerable land-holdings and ran large family estates where they kept horses, cows and a chicken run. Her mother, who had eight children, also turned her hand to farming. Jane herself got totally involved in this work which helps explain her down-to-earth attitude in describing the characters in her books. She loved the country and would sometimes say she thought it must form one of the joys of heaven.

This book is full of pictures with contemporary paintings of this early period. Jane lived from 1775 to 1817. Her 41 years produced books more popular today than they were 200 years ago. This study goes a long way in explaining this, and is a delight to read.