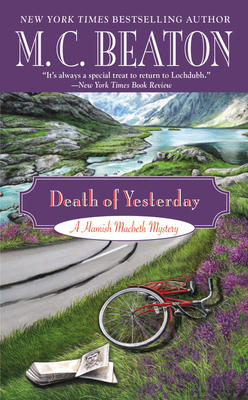 Another trip to the north of Scotland  in M.C. Beaton’s “Death of Yesterday”.

In the Hamish MacBeth story there are three murders this time. But they slip into the everyday life of the beloved constable. We end up just as interested in his pets, one wild cat, a dog and some hens and his gently shifting home life as we are in the odd facts that make up the murders.

Hamish MacBeth has already had plenty of success with solving murders in his career. But for him, he is so fond of his life in a small charming Scottish village that he does not want to be promoted and moved to a bigger industrial centre! Beaton makes his village of Lochdubh so loveable that all his readers know exactly how he feels. This readership has expanded to include a huge collection of addicts in the United States. Like all the Hamish MacBeth stories, this book shows why.