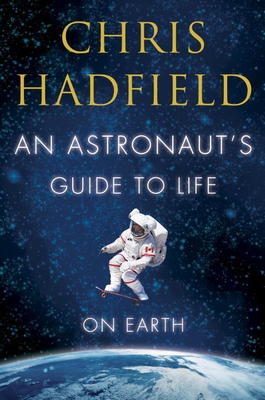 This is an exhilarating book to read and gives an insight into our planet that we haven’t had from radio or television shows to date. The reason is Chris Hadfield’s wit and eloquence in describing his incredible adventures.

Hadfield is world famous as the recent Commander of the International Space Station. He conducted a record-setting number of scientific experiments and oversaw an emergency spacewalk. He also took some amazing photographs and videos about life in space, some of the photos are in this book.

Hadfield was 9 years old on July 20, 1969 when he watched the Apollo moon landing from his family’s cottage in Ontario. He knew then that he wanted to be an astronaut. He also knew that Canadians couldn’t even apply for the job; we didn’t have a space agency. And so this is the story of his gradual training, with basic jet training with the Canadian Forces, then the U.S. Air Force Test Pilot School in California in 1988. In 1991 Canada had its own space agency which took out an ad in the newspaper: Wanted: Astronauts. There were 5,329 applications and Hadfield won.

The rest of the book describes his learning career. He ran 25 Shuttle launches and also served as Director of NASA Operations in Star City, Russia from 2001-2003. He made two close Russian friends and the book vividly describes the small Soyuz capsule in which they spent five months on the International Space Station before returning to Earth.

Hadfield had a very happy marriage and three children. He talks about his philosophy, i.e. anticipating problems and figuring out how to solve them which he claims is the opposite of worrying: it’s productive. It certainly has been for him and this book is a generous way of sharing this.