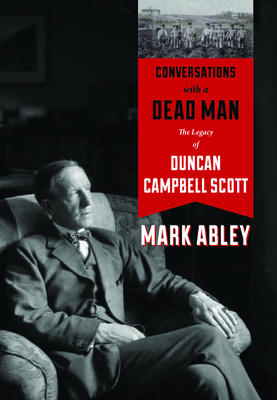 There has been a change in venue for our Books ‘n Brew event with Mark Abley. His event is being moved from the Clocktower Brew Pub to Books on Beechwood. He will be in the store on Sunday, December 8 from 1:00-3:00pm to sign copies of his new book Conversations With a Dead Man.

“As a poet and citizen deeply concerned by the Oka Crisis, the Idle No More protests and Canada’s ongoing failure to resolve First Nations issues, Montreal author Mark Abley has long been haunted by the figure of Duncan Campbell Scott, known both as the architect of Canada’s most destructive Aboriginal policies and as one of the nation’s major poets. Who was this enigmatic figure who could compose a sonnet to an “Onondaga Madonna” one moment and promote a “final solution” to the “Indian problem” the next?

In this passionate, intelligent and highly readable enquiry into the state of Canada’s troubled Aboriginal relations, Abley alternates between analysis of current events and an imagined debate with the spirit of Duncan Campbell Scott, whose defence of the Indian Residential School and belief in assimilation illuminate the historical roots underlying today’s First Nations’ struggles.”