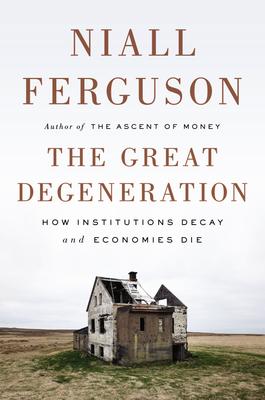 Niall Ferguson is the Scottish professor who teaches at Harvard, Oxford, and Stanford Universities and writes brilliant books on history and economics.

His latest started as a series of lectures for the BBC. It has turned into a searching and provocative book that examines the widespread rot that he claims is threatening our western institutions.

Ferguson looks at four aspects of Western life that he labels democracy, capitalism, rule of law, and civil society. He shows how these institutions in themselves have created great periods in the past. Today, a combination of greed and laziness is causing them to break down. He goes back to the British author Walter Bagehot who, in 1873, noted that: “The peculiar essence of our financial system is an unprecedented trust between man and man; and when that trust is much weakened by hidden causes, a small accident may greatly hurt it, and a great accident for a moment may almost destroy it.”

Ferguson notes that the rule of lawyers has often overtaken the rule of law. Taking education as an example, he shows how over the past 50 years, governments have encroached too far on the realm of civil society. To prevent squandering the breakdown of our institutions, he concludes, will take heroic leadership and radical reform.