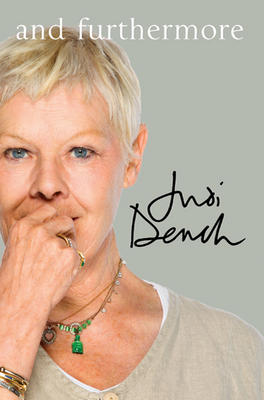 Judi Dench is not only a pleasure to watch acting, but just as rewarding to read in this newest book “And Furthermore.”

It is not the first book about the great actress. There is the 1998 biography by John Miller. But in this volume Dench fills in many of the gaps in her own words and so we get a frank and funny account of what it’s like performing on stage, in a film as well as on television. She does not drop names for the sake of it, but this book is really the story of theatre on both sides of the Atlantic for the last 50 years.

She grew up in a theatre-loving family. Her father, though a general practitioner in York, did a lot of amateur theatricals, as did her mother. Judi considered ballet dancing, as well as theatre design before getting into acting. In 1957 she was asked to play Ophelia with the Old Vic Theatre Company. In 1961 she joined the Royal Shakespeare Company playing with John Gielgud and Peggy Ashcroft in “The Cherry Orchard.”

She confides much of what she learned along the way. The Old Vic taught her how to be part of a company. She also says: “If you really want to know how to speak Shakespeare, Sir John (Gielgud) and Frank Sinatra will teach you. Because one used to present the whole arc of a speech, and the other presented the whole arc of a song, without any intrusive extreme emphases.”

Judi Dench went on to give indelible performances in the classics as well as some of the greatest plays and musicals of the 20th century. She is still acting as anyone knows who catches her in the long-running BBC series “As Time Goes By” with Geoffrey Palmer. This book gives a closer picture of the great actress, with the story of her happy marriage to actor Michael Williams, her actress daughter Finty Williams and grandson Sammy. There are many charming photos. The book has no conceit, just a sharp intelligence and endless sense of humour.