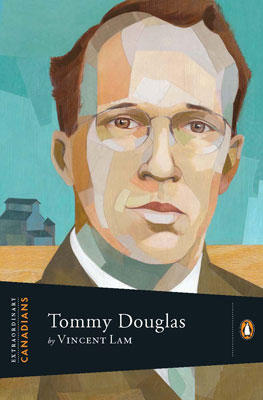 This is one of the most successful books in the Extraordinary Canadians series.

Dr. Vincent Lam, emergency physician and author of the prize-winning “Bloodletting and Miraculous Cures”, takes on the biography of the legendary Tommy Douglas, leader of the CCF government in Saskatchewan and responsible for introducing medicare legislation in that province that eventually spread to the whole of Canada.

Dr. Lam gives a sympathetic portrait of the young Scottish boy immigrating with his family to Winnipeg, l9ll, and later l9l9, their involvement in the Great Depression and Winnipeg General Strike, Tommy’s career as a Baptist minister in Weyburn, Saskatchewan and eventual involvement in politics as a more practical way to fix what he considered a broken and unjust economic system. He had already shown his willingness to fight, winning the lightweight boxing championship of Manitoba in l923. Perhaps more significantly, he had suffered as a boy from recurrent osteomyelitis in his right leg and was only saved from amputation when a renowned orthopedic surgeon offered to operate at no cost as a teaching case. He recovered but never forgot what the care meant to him.

In l932 J.C. Woodsworth, who founded the CCF party, introduced Douglas to M. J. Caldwell,the labour leader. In l935 Douglas ran as a CCF candidate in the federal election and won a seat for Weyburn, Saskatchewan. In l942 he became leader of the Saskatchewan CCF and in years after that introduced socialist measures in a prudently run mixed economy, e.g. universal hospital insurance, the Saskatchewan Arts Board, the rural electrification program.

Douglas own career took him to the leadership of the new NDP party in l96l. It was not until l964 that the Hall Commission recommended the adoption of universal medical care modelled on Saskatchewan’s plan.

Dr. Lam introduces Douglas’ family, his wife Irma, actress daughter Shirley and later adopted daughter Joan. Tommy Douglas retired as leader of the NDP in l97l and spent the rest of his life in Ottawa and a cottage in Wakefield, Quebec.

It is not hard to see why this feisty Scot was once named the most important Canadian of all time. He never gave up on his care for other people – and we all know that.