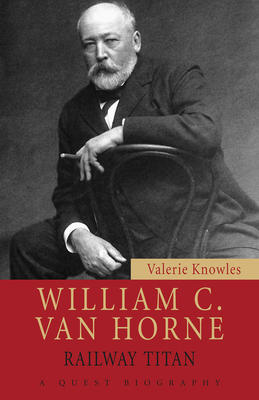 This is a well-written, exciting account of a true “titan”. We don’t produce many – and although William C.Van Horne was born in Illinois, it was when he came to Canada to complete the Canadian Pacific Railway that he became an international force in railways and beyond.

Born in l843, Van Horne had already made his mark as first telegrapher and eventually superintendent of a number of American railways. In l88l he was offered the CPR job and became vice-president of the faltering railroad. Canadian officials gave the train ten years to make it to the coast. With incredible drive, and the descriptions of the dangerous sections along Lake Superior are quite harrowing, Van Horne completed the job in five years and we all know the famous photo of the last spike being driven home, at Craigellachie.

Knowles does a good job sketching in Van Horne’s background. Left fatherless at age ll, he had to help his mother with the other four children. Dutch, and stubborn, he left school at l4 and got a job in the telegraph office. From the beginning he worked long hours, but also had true gifts of vision, as well as an ability to work with others and invent betters ways of doing things.

Knowles describes his life in Montreal where he bought a big house in the city’s Square Mile, on Sherbrooke Street, which has regrettably been torn down. He had a real taste for art, drawing himself, as well as building up a fine collection of European paintings. By this time he had been knighted in recognition of his far-flung financial enterprises all over the world.

Valerie Knowles was born in Montreal but has lived for some time in Ottawa, writing for government departments, magazines, as well as several non-fiction works. This book is part of the Quest Biography and includes a very useful Chronology of William C. Van Horne at the end of the book.