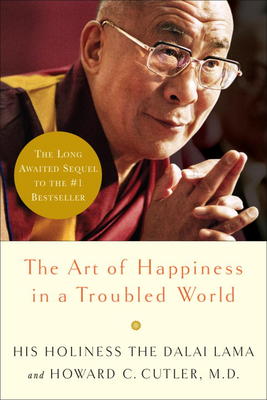 We all know the twinkle, as well as the courage, in the face of His Holiness the Dalai Lama. This book shows how the man with so many problems facing him, still manages both the twinkle and the courage.

Dr.Howard Cutler is an American psychiatrist who has co-authored earlier books in this series with the Buddhist leader, including “The Art of Happiness: A Handbook for Living”. Cutler has spent long visits to the village in northern India where the Dalai Lama lives, as well as lengthy interviews in his hometown of Phoenix, Arizona, when the religious leader was visiting the U.S. There is considerable sharing and trust between the two men in spite of their different backgrounds.

The Dalai Lama has three major concerns: building basic human values; promoting harmony between the major religions; resolving the Tibetan issue with greater freedom for his own people.

He stresses inner discipline before positive emotions can emerge. He talks of a realistic approach to problems but throughout insists that hope and optimism can and must be cherished. Now 74 years old, this monk had become supreme ruler of the ancient land of Tibet when he was l0 years old and enthroned at l5. By age 24, in l959, he was forced to flee when the Chinese Communists took over the country. For 50 years he has been seeking a peaceful resolution with China but without success. When he talks about resilience, he is talking from experience. This wise man has travelled widely and can also relate to our lives in the West. He returns again and again to the part empathy and compassion play. This book makes a convincing case for what he says.