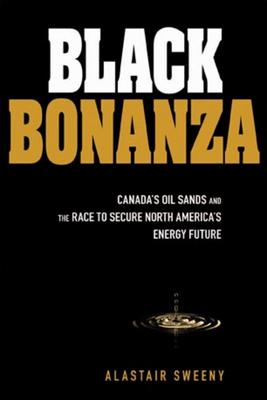 Alastair Sweeny will be in the store from 1:00pm to 3:00pm on September 11 to promote his newest book, “Black Bonanza: Canada’s Oil Sands and the Race to Secure North America’s Energy Future.”

Quoted from Publisher’s website:
“Black Bonanza takes the reader on a tour of the fabulous tar sands of north west Canada, the world’s largest single deposit of oil, greater than that of the entire Middle East. In fact, the 1.7 trillion plus barrels of oil in the tar sands just about equals the world’s entire stock of proven reserves of conventional petroleum.

The global economy is dependent on access to energy and stable market prices are a large factor of its overall health. In contrast to the oil reserves held by other nations, the oil sands in North America represent an opportunity to ensure that we will not be held hostage by countries that would dictate fuel prices. Already the Alberta oil sands have become a major factor the world economy, and certainly represent the promise of a viable and stable source of energy for North America. The result is that the world’s major energy companies are getting deeply invested in the tar sands, and one third of multinational giant Shell’s reserves are now there. Until the 2008 downturn, institutional investors flocked to buy a piece of the action, and even Bill Gates and Warren Buffett have been recent visitors to the site, and all of this action made Alberta second only to China in its growth rate and has made the oil sands a huge target for environmental criticism and controversy.

Black Bonanza is the first major look at the modern engineering feat-and the promise-that is Alberta’s Oil Sands, primarily from a business and political perspective. It is one of the few books to focus on the positives and upside of this enormous project rather than the downsides of the development of this resource. This book will give readers a close-up of the great environmental and engineering challenges of developing the black bonanza that is the Oil Sands.”

For additional information on “Black Bonanza,” you can visit the author at his website, www.alastairsweeny.com or check out the publisher’s website, www.wiley.com. We look forward to seeing you at the event!