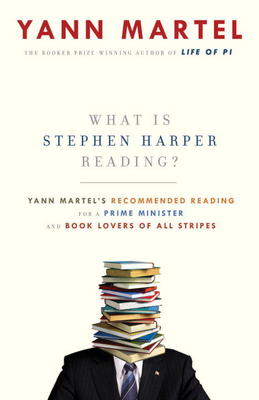 Canada must be the only country in the world where a published author could send a list of books to the head of state, suggesting what he might read, and then have the list published.

Yann Martel is the Canadian author of the popular “Book of Pi”. He was invited to Ottawa to celebrate the 50th anniversary of the Canada Council, along with a large group of other artists, dancers, musicians, etc. While sitting in the House of Commons, he looked down at the Prime Minister, Stephen Harper, and it occurred to him to share his love of reading with him.

As a result, on April l6, 2007, he wrote Mr. Harper a note and posted off a copy of “The Death of Ivan Ilych”, by Leo Tolstoy. He received a polite acknowledgement from Mr.Harper’s office. Martel has been posting him a book every second week from then until quite recently. He has received only one other acknowledgement…other-wise silence.

He sent 55 books in all and you can imagine the incredible range of authors he includes – all the way from Shakespeare, to Northrup Frye—from Paul McCartney to Michael Ignatieff. The covering notes describe the book and why Martell likes it. They are informative and neither patronizing nor impertinent. Martell is disappointed in Mr. Harper’s silence. At least he was not rebuffed.
And for the rest of us, the list is well worth reading.