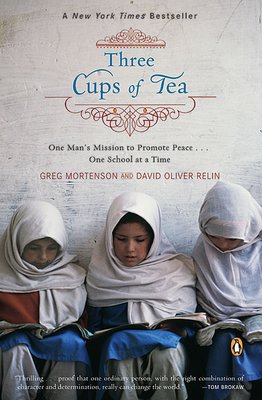 This is the book you need beside you when you put down the daily newspaper with the continuing bad news out of Pakistan and Afghanistan.

It is the almost unbelievable story of an American who set out “to promote peace one school at a time” — and succeeded. Peace is not something we have been encouraged to pursue for some time. Greg Mortenson, through an extraordinary set of circumstances, found himself in a position to do just that.

In l993 he set off from his home in California to climb the world’s second-highest mountain,K2, in Pakistan’s rugged Karakoram mountains. He failed and was rescued and cared for by the inhabitants of a poor village up in the hills. Struck by their poverty, he promised them, and himself, to return and build them a school.

Back in America he helped found the Central Asia Institute and then set off himself to fulfill his promise. Mortenson had grown up in Tanzania, where his parents were missionaries. He learned the language of the Pakistan people. Through dangerous adventures he was kidnapped, held by warlords, shot at by opium smugglers. He became known as “Dr. Greg” and his training as an emergency nurse did indeed help him. By 2009 , 8l schools had been put up, mostly in Pakistan but a few over the Afghan borders. Children, especially girls, who had been sitting on the ground reading their lessons, now had a place to study.

Needless to say this has had a huge effect on this area. Military commanders in the U.S. have put the book on their reading list. It has been published in 3l countries. Mortenson now has a second book published: “Stones into Schools”. He is indeed an amazing man – living proof of what can be accomplished when we talk to “the other side”, instead of shooting them.