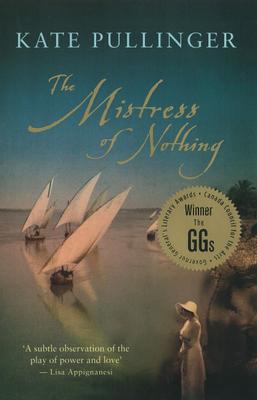 This is a fascinating novel on many levels, not least a glimpse into the beauties and mysteries of Egypt , l50 years ago.

It is set in that country and based on the true story of Lady Duff Gordon. She was a renowned hostess in Victorian London, and author of the book “Letters from Egypt” which is still in print. She suffered from tuberculosis, however, and this drove her to warmer and dryer climates.

That story has been told before, but Kate Pullinger takes a new approach and describes this exotic life through the eyes of the Lady’s chief maidservant, Sally Naldrett. We get the picture of total subservience on Sally’s part to the whims, as well as exciting adventures of the demanding Lady. Salons are re-established in their new headquarters at Luxor, and anyone of importance drops in to the Gordon household just as they did in London.

Sally’s own life widens in this new world. She falls in love,has a baby, and assumes all will be well for her as it never had been in England. Not so. Down come the cruel bans of class prejudice and mistress-servant tyranny. Pullinger is very sympathetic in her description of Sally’s courage and eventual victory in the face of these old prejudices.

The story gives a beautiful view of Egypt, with its vistas, and antique treasures, as well as a lovely description of travelling down the Nile. Sally learns to speak Arabic which opens up an entire new world to her and to us. Though set in l860, much is unchanged today.

Kate Pullinger was born in British Columbia, and moved to London,England in l982. She has written a number of novels, and short stories. This book won the Governor General’s Literary Award.