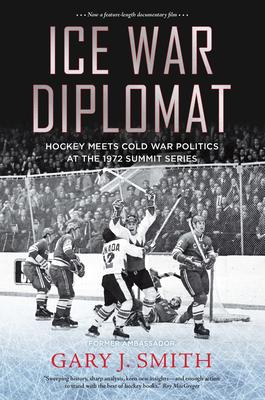 Come by the store on Saturday, September 17 between 12:00pm and 1:30pm to meet Perth author and former Canadian diplomat to Moscow, Gary J. Smith! He will be here signing copies of his new book ICE WAR DIPLOMAT, the story of 1972 Canada-Russia hockey series and his role in making it happen.
Later on Saturday afternoon, Gary will also be attending a screening of the new documentary called ICE BREAKER: THE ’72 SUMMIT SERIES, at The ByTowne Cinema. The screening will be followed by a Q&A session and a book signing.
For tickets to the documentary, visit: https://www.bytowne.ca/…/ice-breaker-the-72-summit-series/
To hear Gary talk about the book and the movie ahead of Saturday’s events, check out his interview on CBC Ottawa Morning here: https://www.cbc.ca/…/15935876-50th-anniversary-1972…
About the book:
“Discover a diplomacy mission like no other in Ice War Diplomat, the behind-the-scenes story of the historic 1972 Summit Series. Amid the tension of the Cold War, caught between capitalism and communism, Canada and the Soviet Union, young Canadian diplomat Gary J. Smith must navigate the rink, melting the ice between two nations skating a dangerous path.
On his first overseas assignment, Smith is tasked with finding common ground and building friendships between the world’s two largest countries. Once in Moscow, he opts for sports diplomacy, throwing off his embassy black tie and donning the blue-and-white sweater of the Moscow Maple Leafs.
Trusted by each side with unparalleled access to officials, coaches and players on both teams, Smith witnesses this unique and epic hockey series that has come to transcend time, becoming a symbol of the unity and clarity that sports can offer. The 1972 Canadian-Soviet Hockey Series will go down in history as a pivotal political event, changing the course of two nations and the world of hockey—the fascinating story in these pages will appeal to history and sports fans alike.”