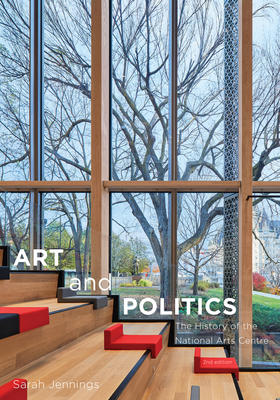 Local author Sarah Jennings will be in the store on Saturday, December 14 from 12:00pm to 2:00pm to sign copies of her newly updated book, Art and Politics: The History of the National Arts Centre. Originally published in 2009, the second edition of this beautiful book was put together specially for the 50th anniversary of the NAC – indisputably one of our city’s most iconic and historically important buildings.

“The year 2019 marks the fiftieth anniversary of the National Arts Centre. In this new and revised edition of Art and Politics, Sarah Jennings covers the highs and lows of Canada’s most important national performing arts institution over the course of five decades, bringing the story up to the present. Art and Politics is a riveting tale of Canada’s finest musicians, actors, and dancers and efforts to put their art at the forefront of both the national and the international scene. Through over 150 interviews with artists, top officials, senior politicians, and others who affected the fate of the National Arts Centre, the book recounts the organization’s early years; the impact of government monies first lavished and then withdrawn, which resulted in its near collapse in the late 1990s; and how over the past two decades, its CEO, Peter Herrndorf, a gifted leader, has brought it back from the brink. The most recent transformations revealed by this new edition include the architectural makeover of the organization’s brutalist-style building in Ottawa, responses to the changing cultural milieu in Canada, and the launch of a national Indigenous Theatre Department in the fall of 2019. Told through the voices of those who created the organization, Art and Politics affirms that the National Arts Centre embodies its motto: ‘Canada is our stage.'”