1. Warlight by Michael Ondaatje
2. A Gentleman in Moscow by Amor Towles
3. The Sentence is Death by Anthony Horowitz
4. Life’s Great Questions by Jean Vanier
5. Bush Runner by Mark Bourrie
6. The Bookshop on the Shore by Jenny Colgan
7. The Silence of the Girls by Pat Barker
8. Our Homesick Songs by Emma Hooper
9. Machines Like Me by Ian McEwan
10. This is How You Lose the Time War by Amal El-Mohtar and Max Gladstone

We know it’s a bit sad to think about, but whether we like it or not, the last month of summer is upon us. In the face of that little rain cloud, we’ve decided to focus on the positive, so instead of thinking about summer coming to an end, we prefer to think of August as an ideal time to relax in the sun and get in one last blast of summer reading! No matter what your literary cup of tea in the forthcoming weeks, there are so many great new books to choose from that we’re sure, with some good old bookstore browsing, you’ll find the perfect read (or reads) to carry you right through to Labour Day!

As the Wheel of Time carries us ever closer to September, one thing we’ll start hearing a lot more about are this fall’s nominations for the many literary prizes due to be awarded between now and Christmas. One such prize, the Booker Prize (formerly the Man Booker Prize), announced its long-list recently and there was one book on it that we’re particularly excited about. My Sister, the Serial Killer by Oyinkan Braithwaite is dark, funny, and one of the quirkiest books we’ve come across recently. There’s no doubt that sibling relationships can sometimes be complicated, especially when your attractive, sociopathic sister has a habit of killing off her boyfriends. Korede loves her sister, Ayoola, and spends a fair amount of time following her around, cleaning up her messes, and making sure that bodies and blood are all taken care of the way they should be. Though she knows that what her sister is doing is wrong, it’s only when the kind, handsome doctor that Korede works with (and is also in love with) asks for her sister’s number that things are brought into sharp relief. Full of dry wit, this debut novel is a truly unique read!

Another debut author that we can’t say enough about is Kelleigh Greenberg-Jephcott. Beautifully packaged, wonderfully written, and based on true events, her novel, Swan Song, takes readers on a journey straight into the heart of the 1970s New York social scene, riding on the coattails of Truman Capote. Having gained celebrity status and entry into the world of the social elite, Capote became a friend and confidante to a number of high profile socialites, a group of women he referred to as his Swans. From sharing juicy gossip on personal yachts, spilling secrets at exclusive parties, and revealing their greatest fears on private jets, these beautiful, wealthy, often vulnerable women trusted Capote with things they probably never told another soul. The problem with trust though, is that it can always be broken. Shocking, gossipy, slanderous, and rife with intrigue, this novel is an incredible ride from start to finish!

If you prefer your literary intrigue wrapped up in fast-paced writing and emotional twists and turns, then perhaps Robyn Harding‘s new thriller should be your next summer read. From the author who brought us the riveting novel, The Party, comes a brand new story of love, betrayal, murder, and mystery that is sure to keep you up all night! The Arrangement takes readers into the shadowy world of sugar daddies as Natalie, a young art student in New York struggling to make ends meet, agrees to become a paid companion to Gabe, a powerful lawyer more than thirty years her senior. With relationship rules agreed upon by both parties from the start and a healthy monthly allowance now headed her way, it seems like all of Nat’s problems have been solved. But when lines start getting crossed and the rules begin to blur, it’s only a matter of time before things spiral completely out of control. With non-stop action and more hairpin turns than the French Alps, you won’t know which way is up by the time you reach the end of this great read!

Summertime, and August especially, seem to be synonymous with the idea of cross-country road trips. Arthur Louis Pullman the Third checks all the essential road trip boxes – coming-of-age, following someone else’s footsteps, and digging up secrets from your family’s past – in the debut teen novel A Lite Too Bright by Samuel Miller. After being stripped of his college scholarship, Arthur is on the verge of a breakdown when he’s sent away to live with his aunt and uncle. It’s during his stay with them that he stumbles across a journal penned by his great grandfather (the original Arthur Louis Pullman) which could shine some light on an old family mystery: where did his grandfather disappear to in the last week of his life and how did he get so far from home? As he pours over the journal, Arthur has a hard time differentiating between Alzheimer-fueled ramblings and lucid passages, but there are enough clues there to send him off on a cross-country train trip to discover the truth about his eponym’s last days and, perhaps, a little something about his own present. Sweet, funny, and heartwarming, this novel would be a lovely way to cap off your summer reading.

If you’re already trying to get geared up for fall and all the great non-fiction books that traditionally hit our shelves in the lead up to Christmas, why not get yourself pointed in the right direction with two neat, new books that look at the history through the lens of specific days and events, and how they helped shape our world? Peter Furtado‘s History Day by Day is a fascinating look at over two thousand years of human history through 366 quotations, each linked to a significant event or anniversary. From Caesar’s death on March 15, 44 BCE to the signing of the Treaty of Versailles in 1919, this book’s unique format will entertain readers even as it teaches them. With a slightly narrower focus but a similar bent, Twelve Days That Made Modern Britain by Andrew Hindmoor is a detailed look at how Britain has gotten to where it is today. Highlighting twelve days and events spanning the last fifty years, Hindmoor’s exploration of modern Britain is at once intriguing, provocative, and incredibly timely. This book is an absolute must for anyone who likes keeping a close eye on British politics!

Though we never seem to have as much reading time as we’d like, that never stops us from trying to enjoy as many books as possible! Here are some more recent and forthcoming releases that we think you should take a peek at: Someone We Know by Shari Lapena, Love Lives Here by Amanda Jette Knox, Chances Are… by Richard Russo, The Book Charmer by Karen Hawkins,  You’ve Been Volunteered by Laurie Gelman, Trudeau by John Ivison, Ellie and the Harpmaker by Hazel Prior, Browse by Henry Hitchings, Send More Tourists…the Last Ones Were Delicious by Tracey Waddleton, Lincoln’s Spies by Douglas Waller, From the Corner of the Oval by Beck Dorey-Stein, Albatross by Terry Fallis (August 13), The Doll Factory by Elizabeth Macneal (August 13), A Better Man by Louise Penny (August 27), The Wake by Linden MacIntyre (August 27), Akin by Emma Donoghue(September 3), Quichotte by Salman Rushdie (September 3), The Long Callby Ann Cleeves (September 3), The Testaments by Margaret Atwood(September 10), Saltwater Classics by Christine LeGrow and Shirley A. Scott (September 15).

We know it’s hard not to get excited about the upcoming fall publishing season, but August has only just begun and the last thing we want to do is wish our time away. So, no matter what this summer has served up for you so far, be sure to enjoy these next few weeks by soaking up some sun, relaxing in the garden, and falling into a great book! 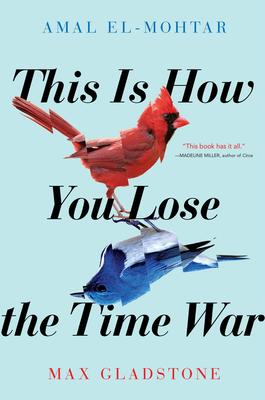 What I’m Reading: This Is How You Lose the Time War by Amal El-Mohtar and Max Gladstone

“Part science-fiction epic, part romance, and part fast-paced adventure, this book came as a complete surprise to me. I wasn’t sure when I first started reading it, but it wasn’t long before I was completely invested in Red and Blue’s war-filled world, their time-travelling ways, and the intricate ballet they perform around each other. I can’t wait to see where the story takes me next!”