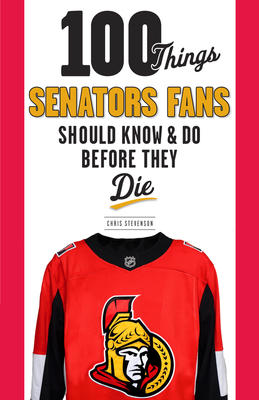 Chris Stevenson has covered the ups and downs of the Ottawa Senators for multiple publications, has appeared on both the pre- and post-game shows on TSN 1200, and will now be paying us a visit on Friday, November 2 from 5:30-7:00pm to talk about all things hockey and his new book 100 Things Senators Fans Should Know & Do Before They Die! Whether you’ve been a fan since the beginning, are a relative newbie, or are just having a hard time reconciling yourself to what’s been happening to the team over the last few years, this book (and this event) are for you!

About the book:
“Most Ottawa Senators fans have attended a game at the Canadian Tire Centre, seen highlights of a young Daniel Alfredsson, and remember exactly where they were when the team reached the Stanley Cup Final in 2007. But only real fans know all the components of the trade which landed Jason Spezza or how to get a seat at Sens Mile. 100 Things Senators Fans Should Know & Do Before They Die is the ultimate resource guide for true fans of Ottawa hockey. Whether you’re a longtime member of the Sens Army or a new supporter of Erik Karlsson, this book contains everything Senators fans should know, see, and do in their lifetime.”