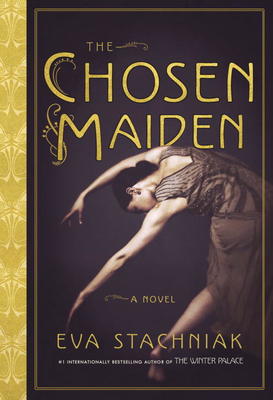 This is a stunning book on the history of ballet as it played out in the tumultuous years of early 20th century Europe.
The Chosen Maiden was in fact the real-life sister of the famous dancer Vaslav Nijinsky. Bronislava Nijinskaya was dancing at the same time as her brother. She was also writing many of the ballets, including one of the most spectacular, The Rite of Spring with its role of Chosen Maiden. The Nijinsky family did not let jealousy ruin their careers and on the whole they helped each other along in every way.
Eva Stachniak has already written five historical novels which hold prizes around the world. They include The Winter Palace, which tells the intimate story of Catherine the Great. In this one, she works with the Memoirs of Bronia, which run up to the end of August 1914. After that she explored the Bronislava Nijinskaya Collection at the Library of Congress in Washington, D.C. and from a vast collection of diaries, correspondence, photographs and scrapbooks she has built what she calls an archival fantasy, or fictional blend of facts and imagination. It makes for a wonderful read.
Reviewed by Anne McDougall