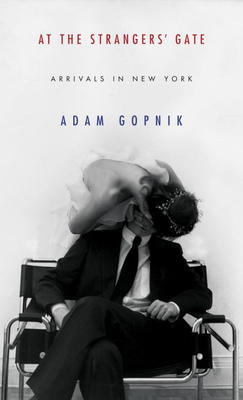 This is an unusual memoir by a writer about a writer. Adam Gopnik tells us all about himself, his blessed marriage, and his hugely successful career in New York City where he is famous as an essayist and a novelist.

At the Stranger’s Gate covers the 1980s when Gopnik and his bride left a secure spot in their hometown of Montreal and decided to go for the bigger challenges that New York offered. Gopnik had a fellowship in art history and planned to get writing jobs on the side. He was soon working at the Frick Art Reference Library, the Museum of Modern Art, and sending essays to the The New Yorker which quickly earned him a permanent spot.

He and Martha could only afford a basement studio which measured 9 x 11 feet and was situated on the Upper East Side. They called it their Blue Room, after a popular song of the day and were apparently happy for three years. They explored the whole of Manhattan, often by walking, and the book’s title refers to a distant corner of Central Park which they loved.

Adam’s writing career continued to flourish, thanks to his funny and frank way of expressing himself. There were also some terrible moments, however, as when his brand new suit trousers fell out of the garment bag on the way home and he never did find them. In the 80s, New York was becoming a city of greed where its beauty (like art and music) and its necessities (food and real estate) went to the highest bidder. This book gives an excellent picture of how one family persevered in making it a successful home.