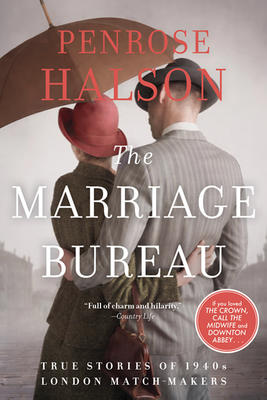 This is the intriguing story of two young British women who set up the first marriage bureau in the country, and made a resounding success of it.

There were the days in the 1930’s in England where there was no such thing as looking for a mate “online” – the system had not yet been invented. The result was many lonely people without means of meeting people. In this book, one young woman, a farmer’s daughter in England, visited her uncle in India where he ran a tea plantation and employed a number of young men from England to help him. The daughter was attracted to one of these men but in the end did not marry him. She saw first hand, however, how these men and hundreds like them in Britain’s other colonies, got very lonely because there were no women for them to marry. The visiting niece listened to her uncle’s suggestion that she set up an office in London where these men could meet a wife while on leave.

She knew another girl, also living in London, who was prepared to help her. They cleared the idea with legal authorities and the rest of the book tells the touching story of London in 1939, some few months before heading into World War II. Many men and women were longing to find a happy marriage.

The author, Penrose Halston, had used the Marriage Bureau herself and made a happy marriage. Later in 1986, she became the owner of a new bureau which had in fact merged with the original one. Halston had worked as a teacher and writer and handles these cases with sensitivity. They make for amusing as well as optimistic reading. In ten years the girls who ran the original Bureau created over three thousand marriages and only heard of two that ended in divorce.