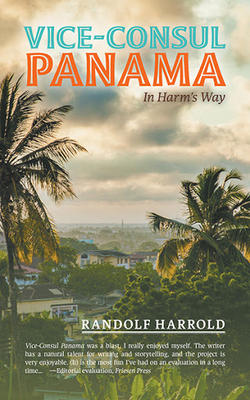 Join us on Thursday, March 30 for the launch of Randolf Harrold‘s new novel, Vice-Consul Panama: In Harm’s Way. The event will be from 5:00-7:00pm and, during that time, you will get the opportunity to meet the author, get your books signed, and partake in some of the delicious snacks and refreshments that will be on offer.

“It’s 1972, and rookie diplomat Rob Kingman’s first major assignment, to find a missing school teacher, soon turns into a match of wits with Colonel Manuel Noriega, head of Panamanian security. Corruption, dictatorship, murder and the birth of the drug trade are rife. The larger Cold War conflict is the framework for this story, with references to the Cuban Missile Crisis, a UN Security Council meeting to be held in Panama to deal with sovereignty over the Panama Canal, and the US struggle to maintain its hold over the main security bulwark in the region.

Our hero on the ground is carrying out his duty to protect a citizen who falls into harm’s way, through all of the surprising twists and turns that follow in a country where the rule of law, democratic values, equality and human rights are not entrenched and guiding concepts. Rob often faces situations where his head tells him one thing and his heart leads him to do another in his stormy relationship with the power behind the dictatorship, Noriega, who himself knows both worlds. Passion, trust, and friendship play through betrayal, intrigue and suspense leading to a surprise conclusion in the Montreal underworld and a thrilling end on the Caribbean Island of Bequia.”

We look forward to seeing you on Thursday!