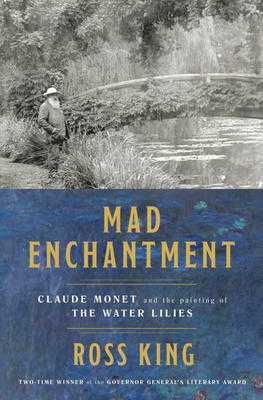 This is another intriguing book by Ross King, who brings an artist to life by a skillful blending of biography and art history.

Claude Monet may be France’s most famous painter. Here we see how he was successful very early in his career, particularly at the Paris Salon in 1865. He went on to get higher and higher prices for his works and was now showing with a group of artistic rebels: Pierre-August Renoir, Edgar Degas and Paul Cezanne whom critics called “Impressionists.” Monet had a famously keen eye for light and painted landscapes and interiors in and around Paris. He preferred the country, however, and in 1883 moved to a small picturesque town north of Paris called Giverny. Here, in a large comfortable house, he had servants, a studio and a number of cars. Friends came down from Paris including the Prime Minister, Georges Clemenceau.

Monet’s first wife had died young but he remarried, taking on quite a large family. He concentrated on the gardens which came with his Giverny house and enlarged them by building ponds, and put in a Japanese bridge. By 1914 his second wife died, also his own son. Monet almost stopped painting entirely, until he conceived the idea of bringing in exotic water lilies, in different colours and did a whole series of paintings on extra large canvases. They gave him a new lease on life and brought in big prices. This book has excellent photos of Monet’s work and how it developed to peak with the water lilies which made him world-famous.