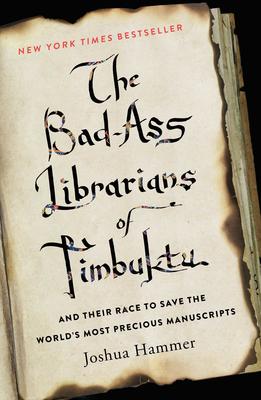 In this week’s news in Ottawa there is the story of an Islamic extremist pleading guilty to orchestrating the destruction of 14 of Timbuktu’s mausoleums because they considered them totems of idolatry. The structures housed the tombs of the city’s great thinkers and were on the World Heritage list.

The story is very similar to a book just published called The Bad-Ass Librarians of Timbuktu. Here we find the story of Timbuktu from early days, in the 12th century, when it had been a big trading centre in Africa. In its Golden Age, many Islamic scholars built an important book trade and Timbuktu was the incubator for the richness of Islam. In this book, which brings the story up 2013,  fifteen Al Qaeda fighters attacked the government library that housed thousands of precious manuscripts by Timbuktu’s greatest savants and scientists, preserved for centuries, and burnt them. A curator who had led the way in building up the collection, built a team of volunteers and in an incredible act of devotion managed to transport the manuscripts by river and road, past hostile jihadi guards, bandits, and attack helicopters, and saved almost all of Timbuktu’s 377,000 manuscripts.

The author, Joshua Hammer, has been a bureau chief for Newsweek and correspondent-at-large on five continents. He knows the countries he is writing about. He has also written three other non-fiction books. This one helps us to understand what the Islamic State is trying to do.