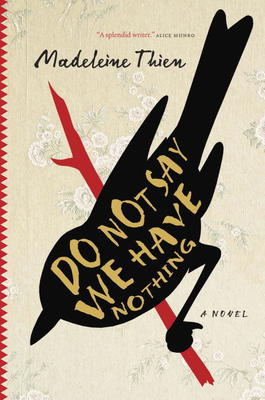 Madeleine Thien’s new book tells the story of two musical families in revolutionary China and how they survived. It stretches from Shanghai in the 40’s to Mao’s Cultural Revolution and then from 1980’s Beijing and the Tienanmen protests up to today where the heroine of the story lives in Vancouver.

This woman is grieving her father’s death by suicide in China. We learn of three particular musicians who were brutalized by the government and told their art was a shameful indulgence. Shostakovitch’s music comes into the story and the trouble it ran into in Communist Russia where it was condemned as dangerously bourgeois.

Madeleine Thien is the daughter of Malaysian-Chinese immigrants to Canada. She spent some years in Vancouver and now lives in Montreal. Her previous works, Simple Recipes, Certainty, and Dogs at the Perimeter, have won prizes in North America and Berlin, and have been translated into twenty-five languages. She gives a very up-close picture of living in China where sensitive artistic emotions are blocked by the relentless tide of the Cultural Revolution.