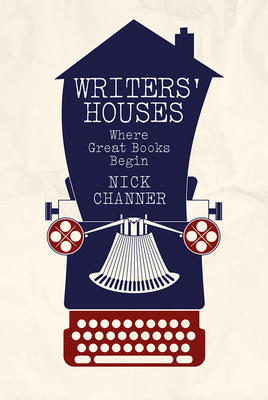 This is an intriguing book that takes you into the houses where some of  Britain’s most famous writers did their work.

The illustrations are in colour, so we get a vivid shot of Dylan Thomas’ Boat House, perched on the hillside at Laucharne in Wales where he looked over a beautiful expansive estuary, or the cottage where Robbie Burns was born and brought up or, again, the hidden West country retreat of Agatha Christie.   There is an excellent photograph of Shakespeare’s home in Stratford-on-Avon, a long, half-timbered house in Henley Street that his parents bought in 1552.  Shakespeare was eighteen when he married Anne Hathaway and they lived in Henley Street for some years. The house became a showplace for visitors, but in 1847 the American showman, P.T. Barnum, tried to buy the building and move it to the United States. Charles Dickens led a campaign to save the house and was successful.

Nick Channer is a full-time author who lives in the heart of England, not far from Shakespeare’s birthplace. He has a special interest in the influence of place on creative writers. He contributes to many publications, including the Daily Telegraph, Country Life and the Scots Magazine. In this book he explores the architecture of these writers’ homes, and looks at the influence of the various rooms on their writing. It gives a special look at many of the great literary figures from Tudor times to the late twentieth century.