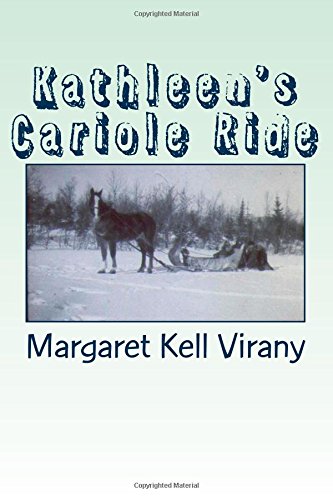 Margaret Virany will be in the store on Saturday, October 31 from 1:00pm to 3:00pm to sign copies of her memoir Kathleen’s Cariole Ride.

“A spark ignited in World War I develops into a lasting love in the snowy expanses and frozen lakes of the northern Manitoba bush inhabited by the Swampy Cree. They were an unlikely pair. She was a city councilor’s daughter from Portsmouth, England and he was a farmer’s son from Cookstown, Ontario. They met in 1917 when her father, a Sunday school teacher, invited some colonial servicemen home for tea. The courtship is conducted on onion skin stationery over 5,000 miles between fog and bog. The writing recounts serving with the Canadian Navy in the North Sea, flying from London to Paris in 1927, crossing the Atlantic, canoeing up the fur trade route, and trekking in winter on a cariole toboggan to get to the hospital for a baby to be born. Day-to-day life of aboriginals is observed, and the positive role of missionaries in that era. More than just a northern adventure story, it is the hard journey of two souls seeking to create a better world after the trauma of the war. The love story is presented by the author but written in Kathleen and Jack’s own words.”

Find out more about Margaret and her book at https://cozybookbasics.wordpress.com/

We look forward to seeing you this Saturday!