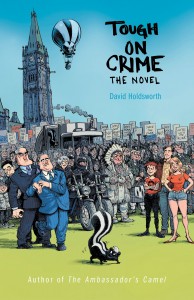 Is the federal election and political spin getting you down? Looking for a funny political book which satirizes the tactics and tricks of politicians bent on winning at all costs? Then Tough on Crime: The Novel is the book for you.

Come by the store on Saturday, September 26 to meet Ottawa author David Holdsworth. He will be here signing copies from 1:00pm to 3:00pm.

The story revolves around a fictional Prime Minister who believes the only way to political success in the next election is to show voters his party is the toughest on crime in Canadian history. His secret strategy is to build a string of huge prisons in the national parks and bring in tough new sentencing laws to fill them up. All is going according to plan until the sixty year old mayor of the town targeted for the first one (near Wakefield, Quebec), learns about it and decides to fight back. She and the town mobilize their forces to end the government’s charade, with unexpected results. To his surprise, suddenly it’s the Prime Minister’s turn to face the people.

The cover illustration was done by David Parkins, editorial cartoonist for the Globe and Mail.