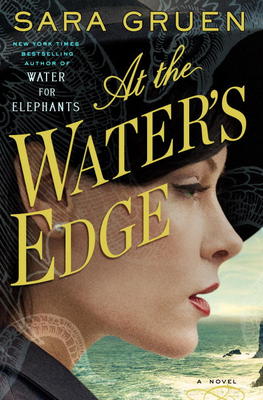 At the Water’s Edge is a novel contrasting the rich, privileged life of Philadelphia in l944 with the struggle for existence in a remote Scottish village where the war affected everyone’s lives.

The story focuses on Madeleine, a young woman from Philadelphia who recently married a draft dodger named Ellis. He had enraged his father, who cut him off financially. Along with their friend Hank, they decided to make the trip to Scotland and try to find the Loch Ness monster, which his father had failed to discover.

The three of them settled in an isolated inn in the Scottish Highlands, where the locals are short of food and fuel, and hold the visitors in contempt. Gradually Madeleine makes friends and helps with the work at the inn. She discovers quite different values in the people she gets to know and falls in love with the beauty of the country as well as the courage of its citizens.

It’s a well-written book by Sara Gruen, who has also written the best-selling Water for Elephants, Ape House, Riding Lessons and Flying Changes. She lives in North Carolina with her husband and three sons.