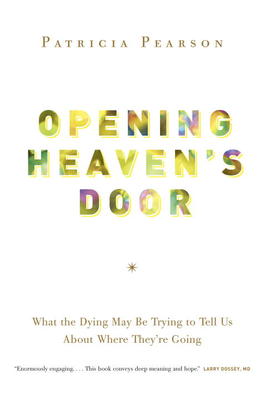 Local author Patricia Pearson will be here on Sunday, May 25 from noon to 2:00pm signing copies of her new book Opening Heaven’s Door.

“Sparked by extraordinary experiences that occurred when her father and her sister both died in the same year, Patricia Pearson set off to explore a realm experienced by more of us than feel comfortable admitting: that hinterland between dying and death, that shocked zone we encounter in crisis, where events happen that don’t lend themselves to rational explanation but hint at a world beyond the quantifiable. She discovered what she calls ‘a curious sort of modern underground – a world beneath the secular world, inhabited by ordinary human beings having extraordinary experiences that they aren’t, on the whole, willing to disclose.’

Pearson, a gifted and empathetic writer, brings us effortlessly into her quest for answers. Those near death, palliative care staff, scientists and theologians who have approached the boundary between life and death all share their wisdom here.”

We look forward to seeing all on Sunday!