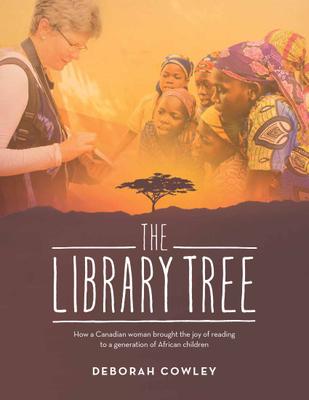 This is an impressive tribute to a gentle Canadian woman who brought the joy of reading to a generation of African children. The writer is Deborah Cowley, based in Ottawa, with wide international experience as broadcaster and author.

In The Library Tree she is writing about Kathy Knowles and describes how she was living with her husband John (both from Toronto) and their three children in l990, when a job offer came from Ghana for an accountant to a Canadian-owned gold mining company. Ghana had returned to relative calmness after a turbulent time following independence from Britain. The Knowles set off, Kathy expecting her fourth child. They arrived in the capital, Accra, and got settled with a good staff. Kathy liked to sit in the garden under a scarlet Flamboyant tree and read storybooks to her children. Very soon friends of the children crept into the garden too. They had never seen storybooks and were bewitched. Very soon some 70 were coming. Kathy and John decided to turn their spare bedroom into a tiny library to be called the Osu Library, after the name of their street.

From this beginning, the book tells how Kathy negotiated with school and city officials to buy an empty shipping container, and so the library grew. Volunteers from Canada sent more and more books and the children slowly learned to read. After four years years in Ghana,  the Knowles family returned to Canada, to live in Winnipeg. In l994 Kathy was back in Ghana checking on the libraries and pleased the way they had caught on.

Deborah Cowley is a free-lance journalist with wide international experience, based in Ottawa. She had heard of Kathy Knowles’ work and in 2000 had an assignment from “Readers Digest” and flew to Accra. By that time, Kathy was going to Ghana twice a year for five weeks. She met Cowley who would continue her connection and by 20l2 had made fifteen trips to Ghana.  She visited the libraries, which grew in number, watched the children greeting Madam Katty with songs, poems, bunches of flowers. She saw the first community centres built, larger than the early libraries, with a stage for plays and drums for concerts. She also saw Kathy writing a series of storybooks about Africa which are now widely published and distributed to the libraries.

This book has good photographs of this modest, but very effective, story.