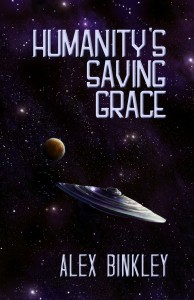 Be sure to stop by the store on Saturday, November 30 to meet local author Alex Binkley. He will be here signing copies of his debut novel Humanity’s Saving Grace from 10:30am to 12:30pm.

“Having barely avoided self destruction, an ancient race has expanded to eight other worlds. While the Beings explored Earth numerous times in two centuries with their flying saucers, they didn’t consider the primitive Terrans worth contacting. That changes when their worlds come under attack from a relentless, mysterious foe.”

Alex Binkley is a freelance journalist who, after several decades of reporting on the Canadian Parliament and government, became inspired to write fantasy and science fiction stories. He starts with a what-if scenario and explores where it and human nature might lead.