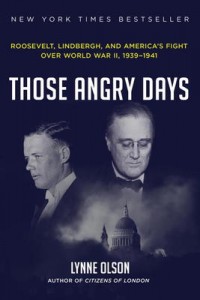 Lynne Olson has already established herself as a vivid reporter of the politics and diplomacy of World War II as they involve the governments of the U.S. and the U.K. Troublesome Young Men focussed on the rebels in England who pressed for Winston Churchill’s leadership. Citizens of London gives an unforgettable picture of that city in the blitz, as well as the Americans who stood with Britain in her darkest hour.

In this new book, Olson gives a closeup of the two men representing opposing sides in her own country, the U.S. These were President Franklin D. Roosevelt, who wanted to help England stop Nazi Germany, and the famous aviator, Charles Lindbergh, who went across the country preaching isolationism.

In Those Angry Days Olson has done new and fascinating research on the years 1939-1941 leading up to Pearl Harbour. It makes for an exciting book and shows, as one reviewer points out “a great democracy rallying to a great debate.”

Lynne Olson lives with her husband, historian Stanley Cloud, in Washington, D.C. She has written two books with him, as well as Freedom’s Daughters: The Unsung Heroines of the Civil Rights Movement from 1830-1970.