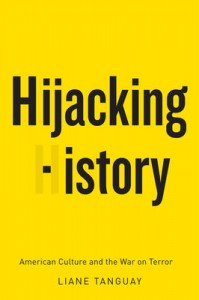 Local author Liane Tanguay will be in the store on Monday, June 17 from 5:30pm to 7:30pm, to launch her new book Hijacking History: American Culture and the War on Terror.

“In Hijacking History, Liane Tanguay unravels the ideology behind an American enterprise unprecedented in scope, ambition, and brazen claim to global supremacy: the War on Terror. She argues that the fears, anxieties, and even the hopes encoded in American popular culture account for the public’s passive acceptance of the Bush administration’s wars overseas and violation of many of the rights, privileges, and freedoms they claimed to defend.

A timely retrospective on the War on Terror, Hijacking History examines popular representations of US military action, dissects both the logic and the aesthetics by which the dominant discourses strive to justify war, and reveals how some of these forces can ultimately contribute to an ideology of resistance.”

We hope to see you all come out for this great event!