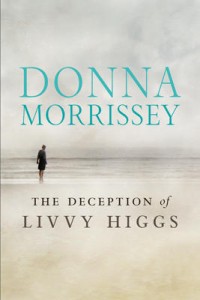 Donna Morrissey, author of The Deception of Livvy Higgs, grew up in a small fishing outport in Newfoundland. Her descriptions of fights between the French and English in the heyday of the Maritime shipping industry on the French shore of Newfoundland form the best part of the book, along with vivid descriptions of life in war-torn Halifax, where Morrissey now lives.

These memories are the background of Livvy Higgs’ life. She suffers from fierce hurt from her proud, greedy father. Her grandmother is equally ruthless toward Livvy and her connections. Between them the child leads a lonely, sorrowful life.

This book tells how, at the end of her life, she tries to piece together the cruelty done toward her. A neighbour, with problems of her own, comes to her rescue. But it is altogether a rather grim story, only slightly relieved by a happy – though childless – marriage on Livvy’s part.

Morrissey is the author of a number of prize-winning novels, and has recently written a children’s book, illustrated by her daughter.