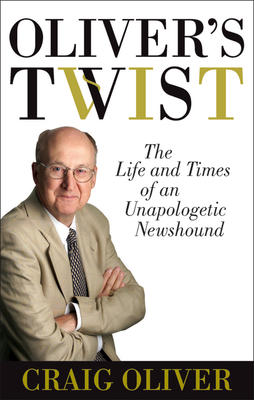 Most newswriters who say they are telling it like it is are keeping something back. Not Craig Oliver.

His book “Oliver’s Twist” is a racy frank tale of major political figures across this country, as well as some extraordinary stories from his own life. Well-known today as the chief Parliamentary correspondent for CTV news, based in Ottawa, Oliver has covered every kind of story ever since he broke gently into CBC radio as a student in Prince Rupert, B.C. He learned early to take chances whenever they turned up. The only child of alcoholic parents, he had spent his growing-up years in the houses of strangers. Only at school did the occasional teacher give him a chance to practise his writing with which he showed talent. After the job with the CBC in Prince Rupert he was able to move to Toronto and eventually Ottawa, Washington and Central America.

Oliver has a natural charm and talent, beloved by anyone who watches him on television. He is also loyal, even to the mother who often had to give him up for care, but to whom he dedicates this book. He has followed the lives of politicians in this country for four decades and his insight has led to some amazing anecdotes which are found in this book.

Apart from his profession, Oliver had a passion to go on canoe-trips on some of Canada’s wildest wilderness rivers. He did this with a distinguished group including Tim Kotcheff, Eddie Goldenberg and Pierre Trudeau. He has managed all this while being declared legally blind for more than a decade. His book is a treat, Christmas or any time.